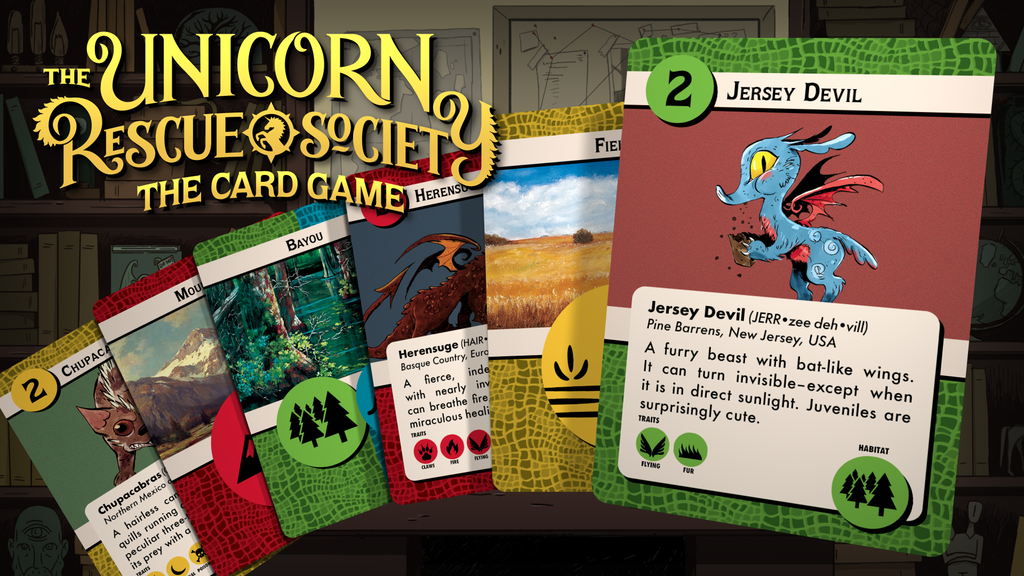 A fast-paced card game about rescuing mythical creatures. Based on the hit kid's book series "The Unicorn Rescue Society" For more information, check out the Kickstarter campaign below.

Latest Updates from Our Project:

The first batch of games just arrived from the printer. And they look great!

We'll begin shipping immediately, so keep an eye on your inbox for a tracking link.

If you're one of the small handful of people who haven't filled out the shipping survey, please do so as soon as you can. We can't send you your game if we don't know where your mail goes.

I just received word from our factory that the games have been picked up by the shipping company. That means they'll be arriving at URS HQ in about a week (barring unforeseen shipping/customs holdups), and we'll start fulfilling orders to Kickstarter backers as soon as they do.

Most people finalized their shipping addresses in BackerKit when the Kickstarter ended in June. Today I'm going to have BackerKit attempt to lock everyone's orders, which will give you a chance to update your shipping address if you need to, or complete the checkout process if you haven't gotten around to it yet.

We're almost there! If you have any questions, don't hesitate to reach out.

We've been relatively quiet for a while, but lots has been going on behind the scenes at Unicorn Rescue Society. For the last month or two, our manufacturer has been printing and stamping and cutting and folding and assembling the games. We even got them safety tested, so you can be sure that our card game won't explode or cause any kids to lose a finger. There's a Chinese national holiday in the first week of October, and we've been told the games will ship to us via expedited air shipping when they return from their break.

So we're in the home stretch! We should be receiving the games at URS HQ in mid-October, and we'll begin fulfilling the orders immediately. I'll send out another update when the games leave the factory with a more precise timing update.

Oh, and since you've been so patient with us, here's a preview of all of the cards in the game:

It's been a while since the last URS Card Game update, but things have been moving along furiously behind the scenes over here. All of the signed book rewards went out last month, and the art and manufacturing is on schedule for getting the games to you in October.

We are beyond thrilled about the illustrations that URS series illustrator Hatem Aly has made for the game. We don't want to give everything away just yet, but here are a few of our favorite cards.

So if you've read the URS books, you know that "Unicorn Rescue Society" is an aspirational name for the organization. Professor Fauna's greatest dream in life is to find a unicorn. But, even though he's been able to catalogue and protect hundreds of other mythical creatures in his long career, he hasn't been able to find a unicorn yet.

And if you've been lucky enough to join one of our public playtests of the game during Adam's book tour and school visits, you may remember that there wasn't a unicorn card in the game. How could you rescue a unicorn if Professor Fauna couldn't even find one?

Well, today I have a confession. We've been holding out on you.

We can't tell you exactly how we know that, but if you come across the new paperback editions of The Creature of the Pines and The Basque Dragon, there are bonus stories in the back about the Secret Order of the Unicorn, the medieval predecessor to the Unicorn Rescue Society that protected endangered unicorns. Do those stories tie in to the modern URS of professor Fauna, Uchenna, Elliot, and Jersey? Maybe. We're not currently at liberty to say.

And there's also a unicorn card in the game. It's a creature that needs to be rescued, but it's different from all of the other creatures. Here's the page from the rulebook explaining how it works.

That's all for now. Stay tuned for more updates in the coming weeks!

After solving the mystery of the sixteen missing Sasquatch – which sounds like a URS adventure, but in reality involved more UPS tracking numbers and insurance claim forms than Uchenna and Elliot would be comfortable with – the book rewards are signed, sealed, and ready for the mail carrier to pick them up.

If you pledged for a book reward (or added one on through Backerkit), keep an eye on your Kickstarter/Backerkit email addresses. You'll be getting a tracking number soon. Then, in a few days (if you live near New York) or a little longer (if you live in, say, New Zealand), you'll be getting a purple package in the mail with the books you requested.

What about the games?

The games themselves are still scheduled to ship in October.

Hatem is hard at work on the illustrations right now. It's very exciting! We'll have more to share on those soon.